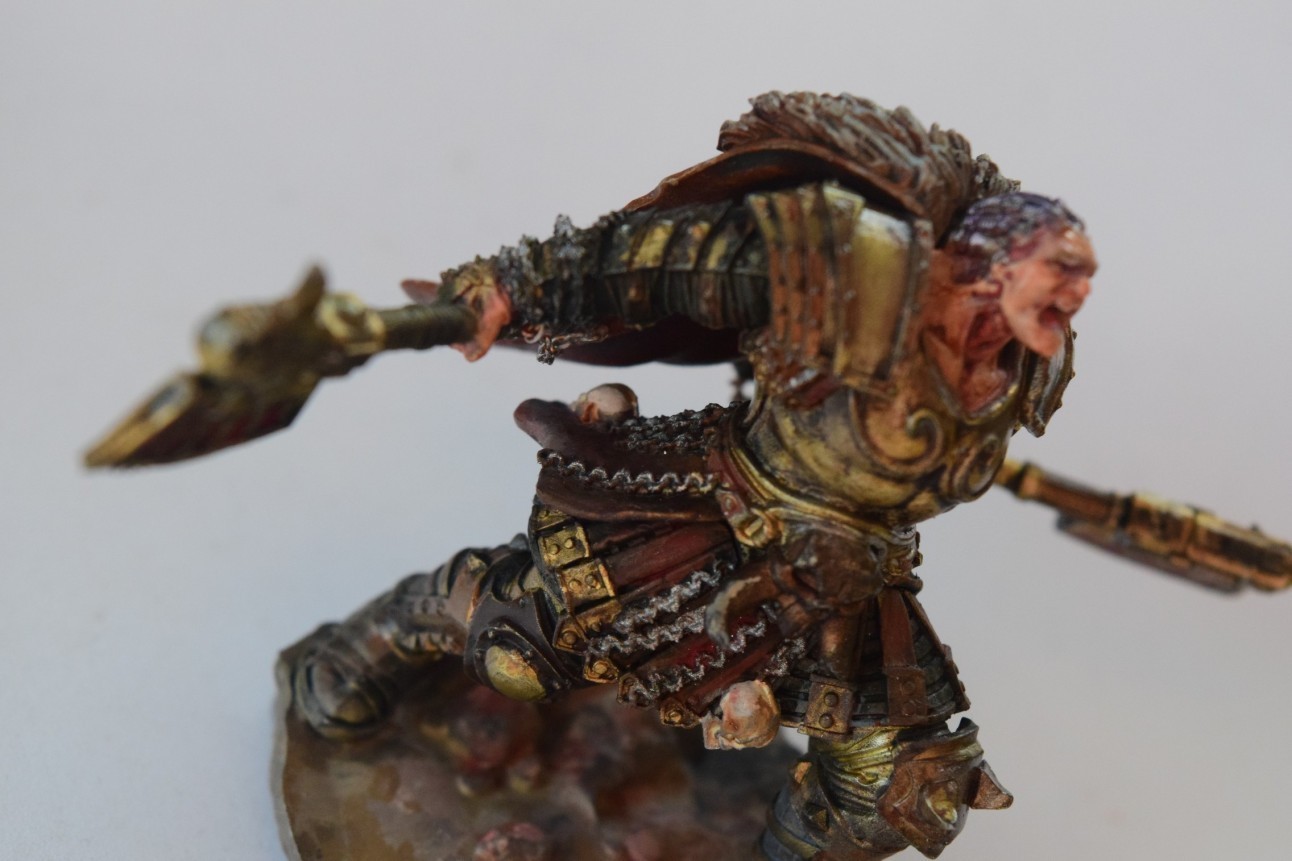 In this case I bought Red Angel because I liked both. Games Workshop and Forgeworld have their own official figures, obviously, and while I do like some, a few do not really resonate with me. In the case of Angorn, the Primarch of the World Eaters, I did not particularly like the official figure. Due to the popularity of the tabletop game and the setting, there are many 'boutique' companies offering resin alternatives, upgrades, or just figures that have not been released from the official source. In this case Artel W. Miniatures released Red Angel, which is obviously not called Angron, but, well, he is Angron from one end of his chainaxe to the other end.

The sculptor managed to capture not just the bestial rage but the agony as well, making the character more three dimensional than the usual berseker description of him. (Aaron Dembski-Bowden's books really fleshed out Angron into a tragic character who is while not exactly likeable or sympathetic, but for whom you can actually feel pity for.) In short, he is a lab-created son of the Emperor of Mankind of the Warhammer 40K universe, who was separated before birth from him, and ended up on a planet where they put pain-engines ("butcher's nails")  into his brain to force him to fight gladiator games. This pain engine, as the name suggests, caused insufferable pain. The only way to lessen the pain was aggression - so we end up with a constantly raging superman, who leads a Spartacus-like revolt on his planet; he is saved by the Emperor in the last minute, but his brothers and sisters are left to die. This leaves him somewhat resentful towards big E because he planned to die with them and he did not particularly liked being rescued out of the blue. This is why it is not surprising he joins Horus when he revolts. /Lore summary ends here./

Artel W. Miniatures' website has renders of the parts; I present the completed figure. They arrived in the signature Artel W. Miniatures box with an actual wax seal in a blister pack. The resin is really nice to the touch, and looks really smooth; this is when you understand what "high quality resin" means. The parts were completely flash-free and perfectly moulded, no bubbles, no damage. (So far all minis ordered from Artel W. Miniatures were flawless.) The miniature is really simple to assemble. There is an alternative chest you get, but that is the extent of the choices with it. He does not wear a power armor (or no armor at all, if you decide to use the second chest option), so he is most likely depicted during his gladiator years. He does hold his signature weapons, Gorefather and Gorechild so there might be some anacronism in the figure. (Not that it takes anything away from the model.) He is about 6 cm from head to toe, which is considerably larger than the average 28mm figure, but all the primarch issued in mini form were of similar size (except for Magnus and Mortarion); he should be perfectly fine being used as a stand-in for the official Angron figure in tabletop.

Assembly is done in about 5 minutes, painting in a bit more. Actually about three weeks of working on and off... Now I am quite pleased how it turned out, but I am not a Golden Demon winner. The only thing I added was the chain to the weapons -he had them chained to his wrists according to the books, and it does look cool.

His skin was painted with Citadel paint's flesh colors. The armor (and all other metallic colors) were painted with AK Interactive's True Metal wax-based paints, with washes added in several layers; the final coat was a clear varnish coat to seal the paint and give it a polished metal look. (I am not particularly fond of NMM.)

Obviously he can be used in other game settings as well, or just as a standalone cool figure. Apart from the chain-axes and the pain engine nothing is particularly WH40K about it, so he would work as a shouting gladiator, warrior in a fantasy setting as well... just swap the chain axes, and modify the dreadlocks of the Butcher's Nails. 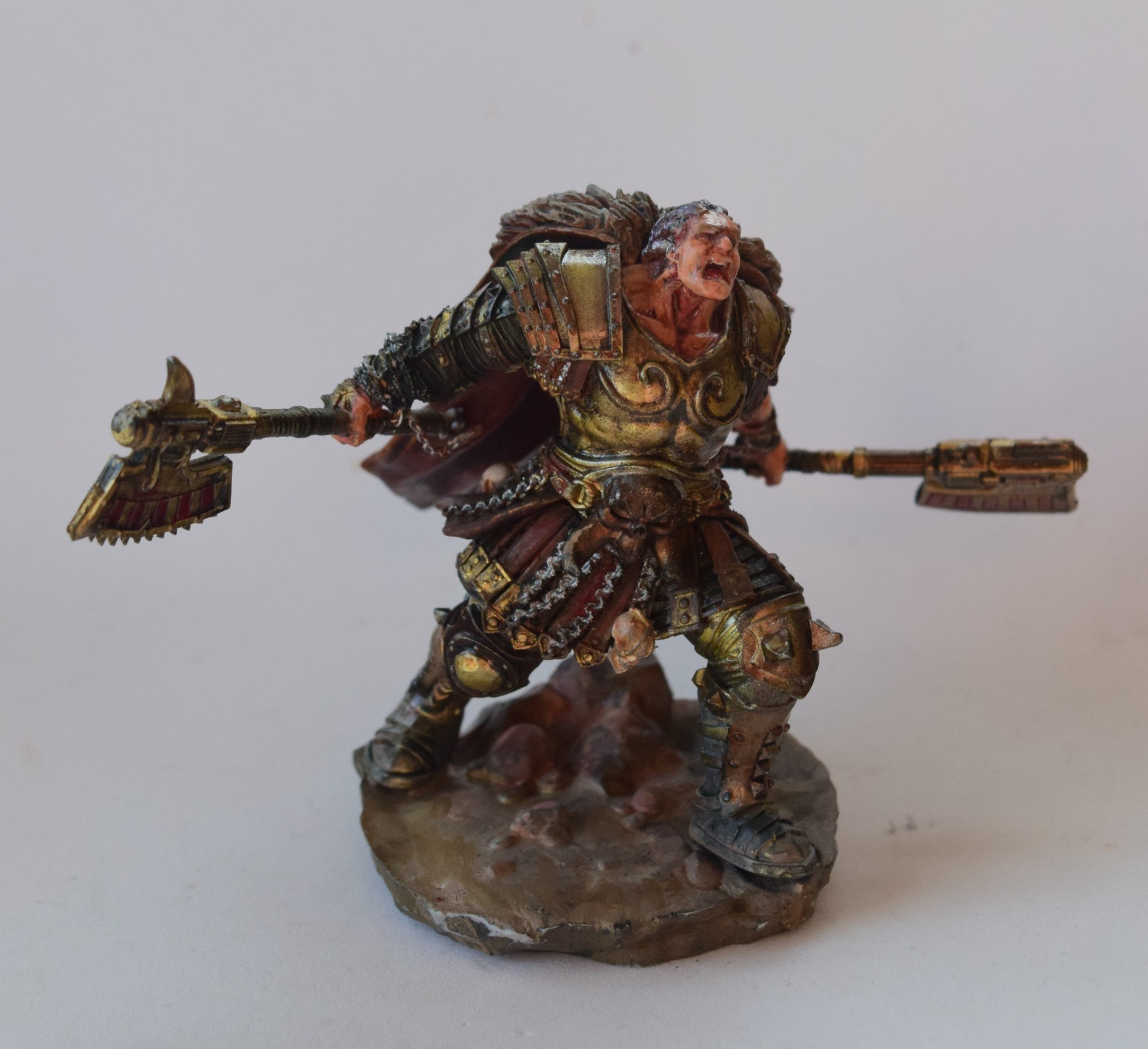 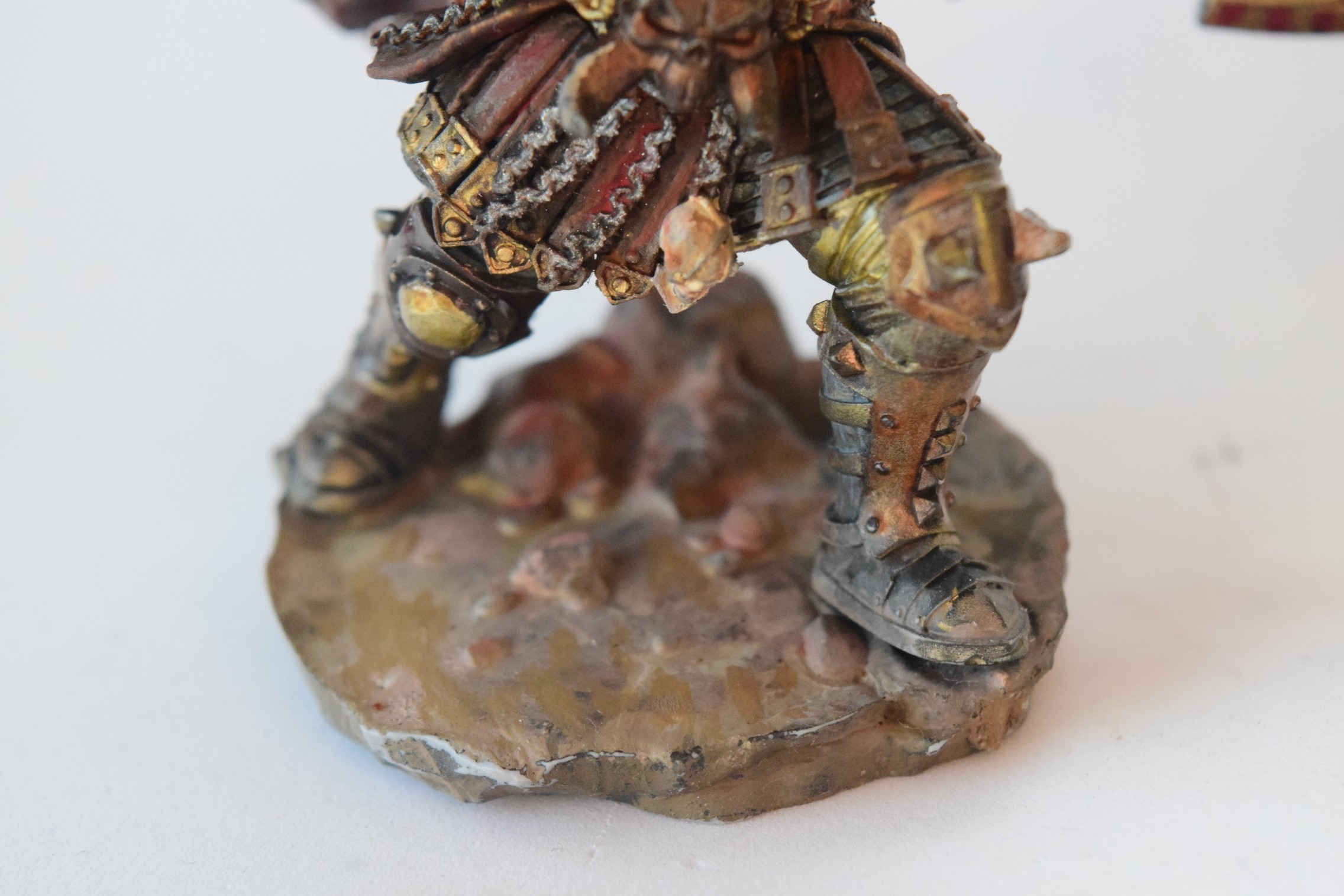 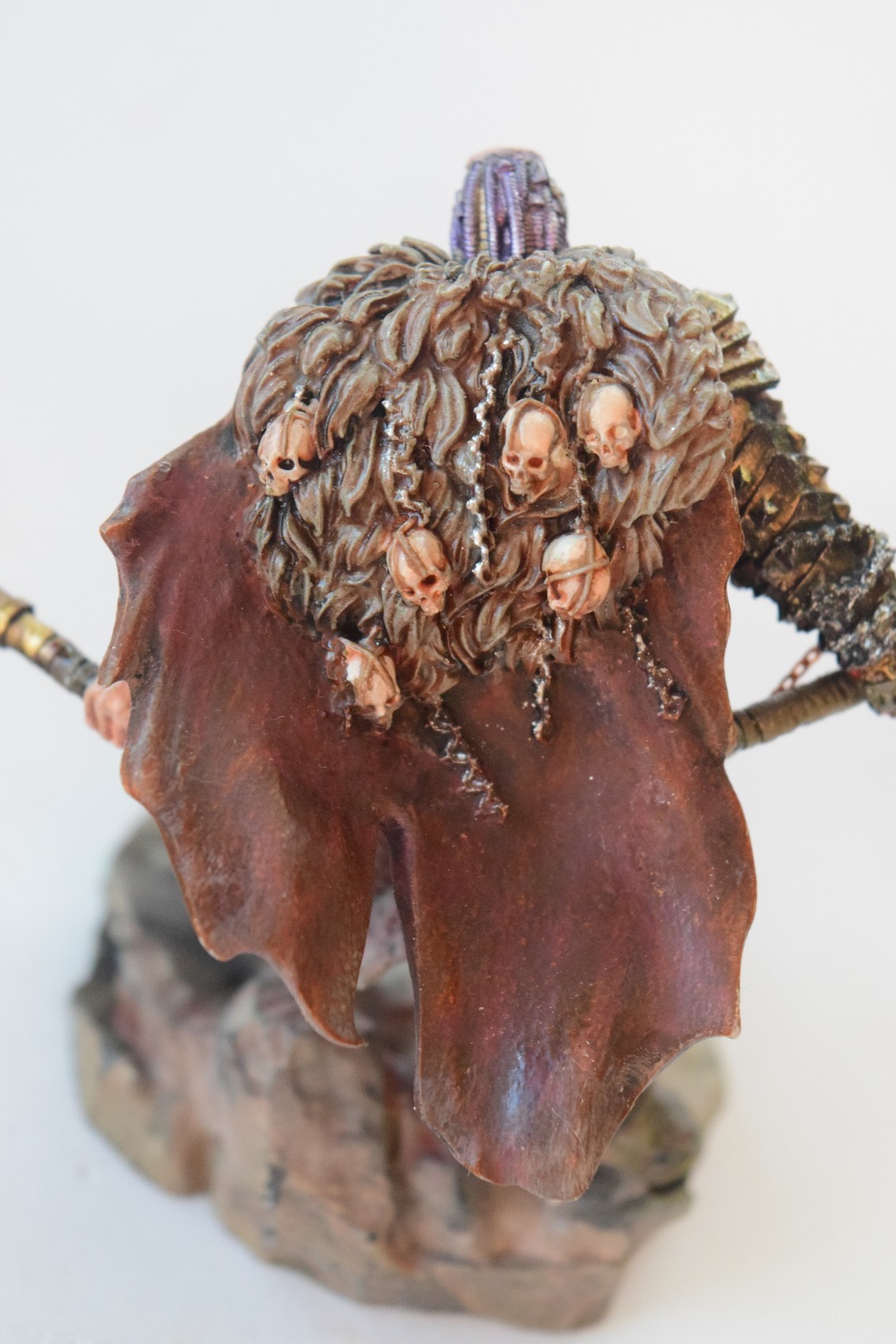 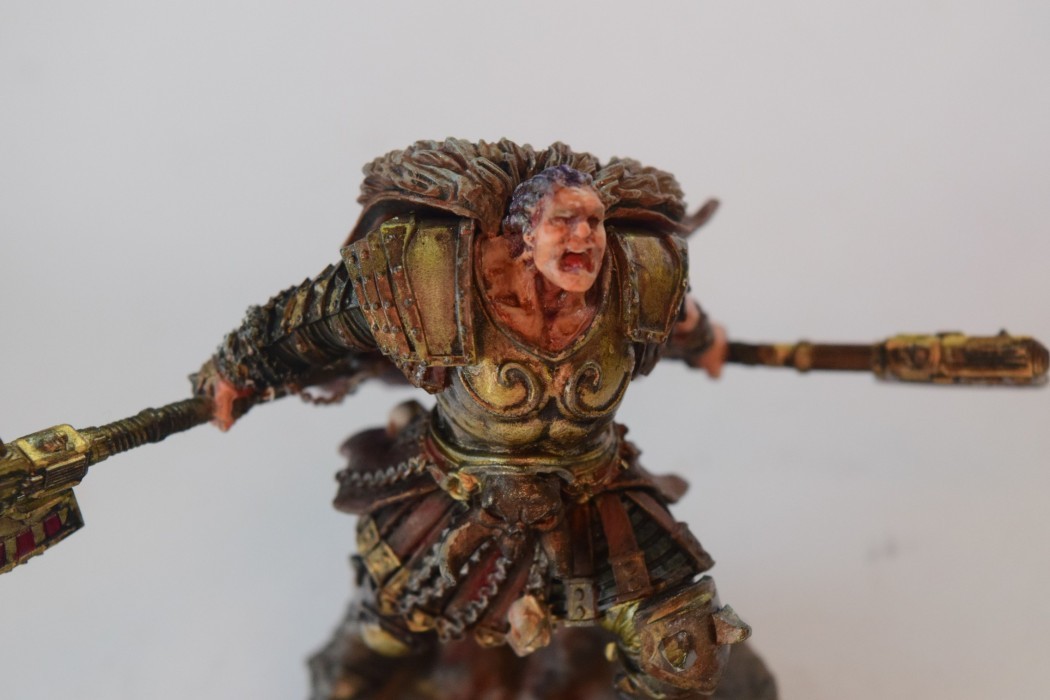 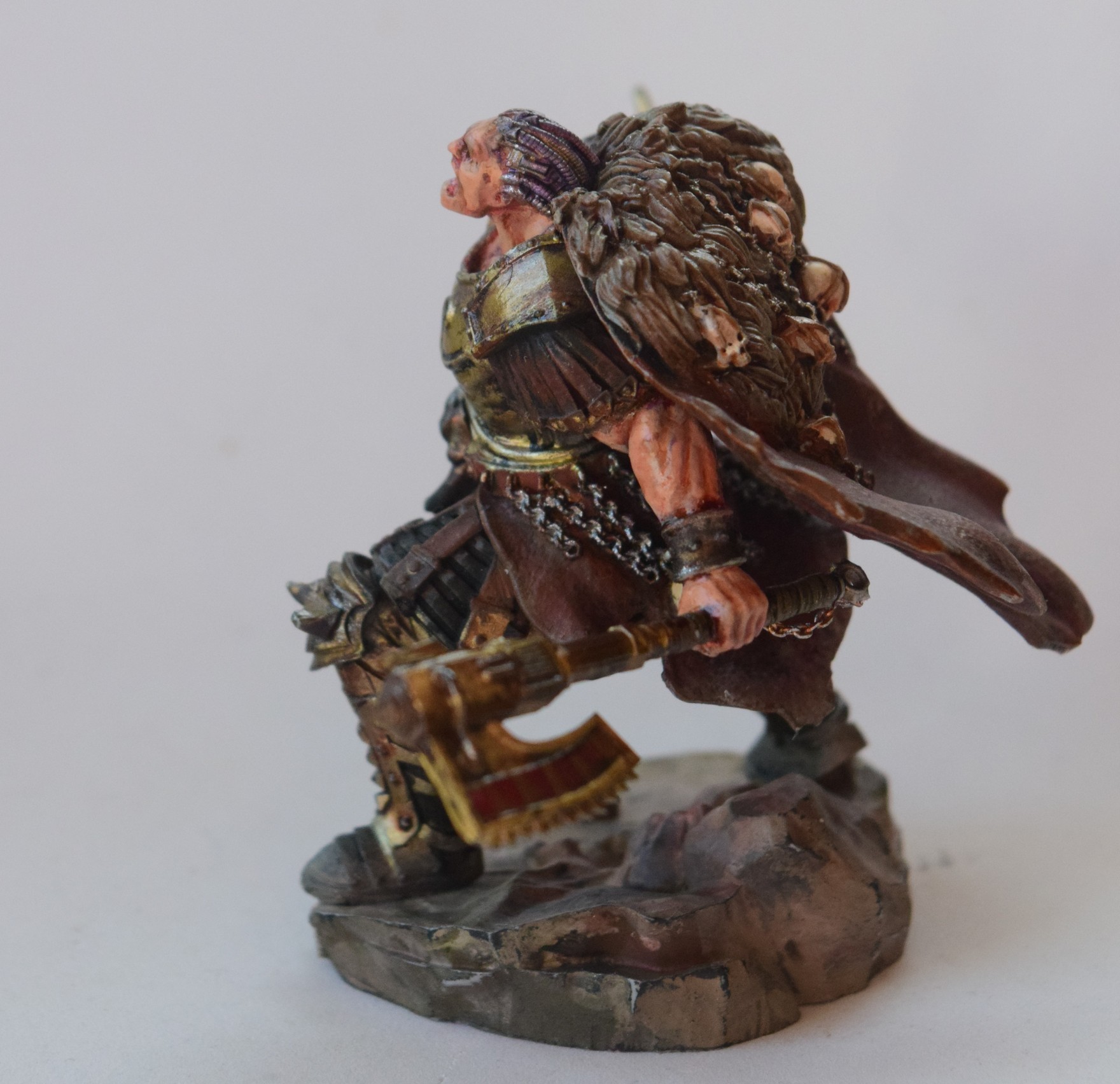 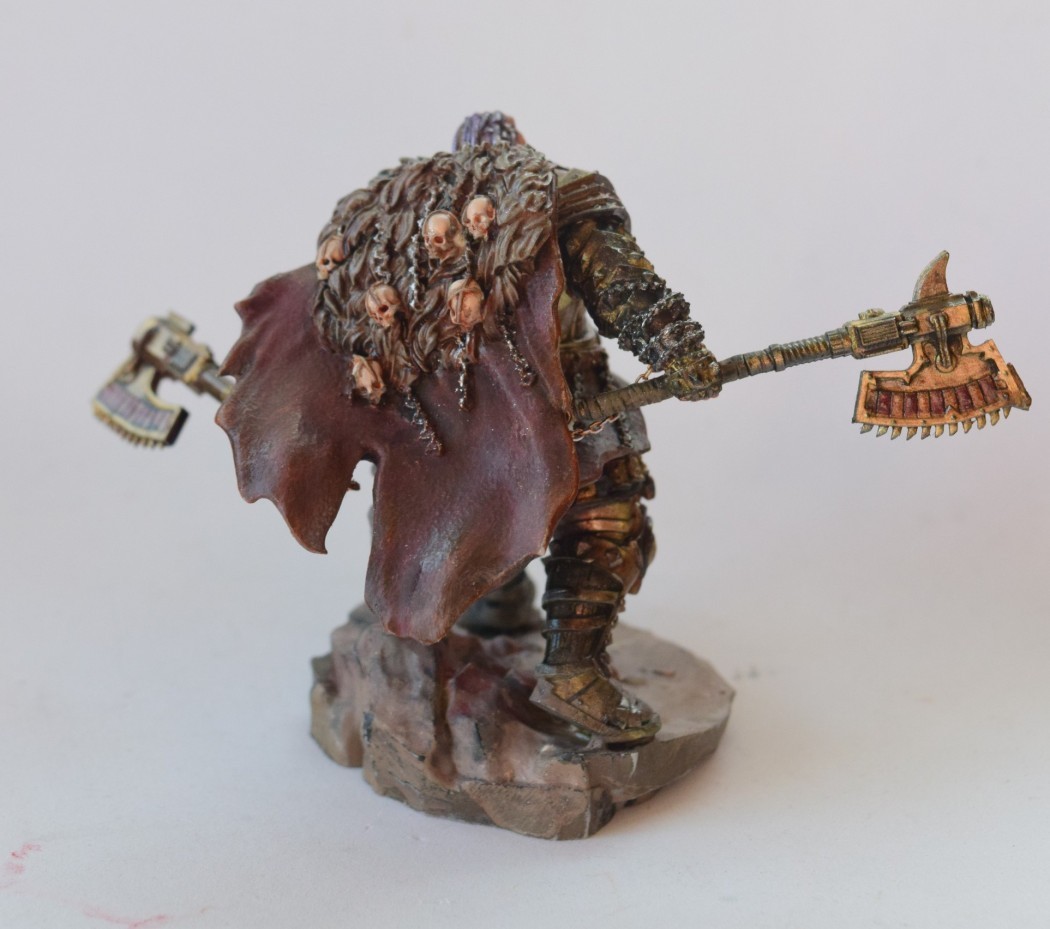